We are accepting applications for the summer of 2023. Click here for the Application

How Did Brownwood Acres Get It’s Name?

In the 1920’s, Marie Kay Brown and her husband built a cottage on the shores of Torch Lake, MI.  Many of the locals traditionally incorporated “wood” into the names of their cottages. Being a fan of traditions, Brownwood was born. After a few cold years on Torch Lake, the Brown’s decided they needed a warmer location off the water in the winter and bought the farm that connected to the Brownwood cottage. This became known as Brownwood Acres.

How it All Began

Brown's daughter Mary Louise moved from Chicago to Torch Lake with her two children, daughter Mary Lou (Mar) and son Gary, to be closer to her parents. The two children finished their chores one evening and decided to sell the excess honey at a roadside “stand” using two sawhorses and a wooden plank. To their parents' delight, the young entrepreneurs did quite well. Soon, one hive became two, then three, then four, then more.

The family operated out of the small roadside stand for several years. In 1945, Mary Louise and now husband Cliff Morse decided to build a one-room market. That same year as a result of World War 2 efforts, sugar rations were reduced to just 30 pounds a year per household. Since sugar was a key ingredient to canning and preserving foods at the time, Mary Louise soon found herself using the family's honey in place of sugar for her homemade preserves. Traditionally served to guests, Mary Louise received so many requests for her tasty preserves that she decided to sell her jarred goods along with local produce at the roadside shop. 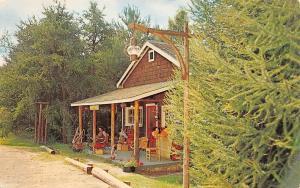 The original Honey House circa 1950’s.

Mary Brown sits on the porch

By 1951, the one-room market had expanded to three rooms as more space was needed for her ever growing assortment of food and gifts. Ever the entrepreneur, Mary Louise decided to rescue an old schoolhouse she had heard was being sold. She purchased the one room Grass Lake School House, built in 1875 and Antrim County's first log school house. The building was carefully disassembled, numbered and put back together on what was becoming the Brownwood Acres Campus. 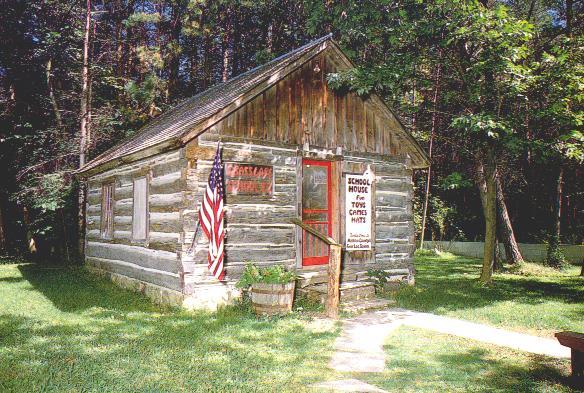 Business continued to flourish. In 1957, Mary Louise purchased the run-down Eastport Inn. Built in 1866, the Eastport Inn had originally served as a Stage Coach stop. A historic site during the logging era, the Inn was halfway between Traverse City and Petoskey. Passengers and horses used the Inn to rest overnight.

To relocate the Inn, it would have to be moved 3 miles along the winding shores of Torch Lake to reach the Brownwood grounds. After Morse's initial requests to temporarily disconnect the telephone cables because the Inn would cut them if moved down the road were denied, Mary Louise formulated a plan to bring the building over the ice of Torch Lake.

The family hired a local team of movers to lift the building slide it across the frozen lake. They waited until the ice was several feet thick and the weather was cold and calm. The Inn was lifted and placed on large steel I-beams. A commercial tow truck was attached to a cable that was connected to the I-beams. Moving slowly at first, the truck and Inn began traveling a little faster than they should have. The beams hit a rise in the ice caused by freezing/thawing and expansion pressure. The ice cracked and gave way, as a large crowd watched the building begin to sink below the top layer of ice.

News of the “Inn that went In” made headlines across the nation.

Fortunately, the building was only in about 6 feet of water and settled on the bottom of the lake. 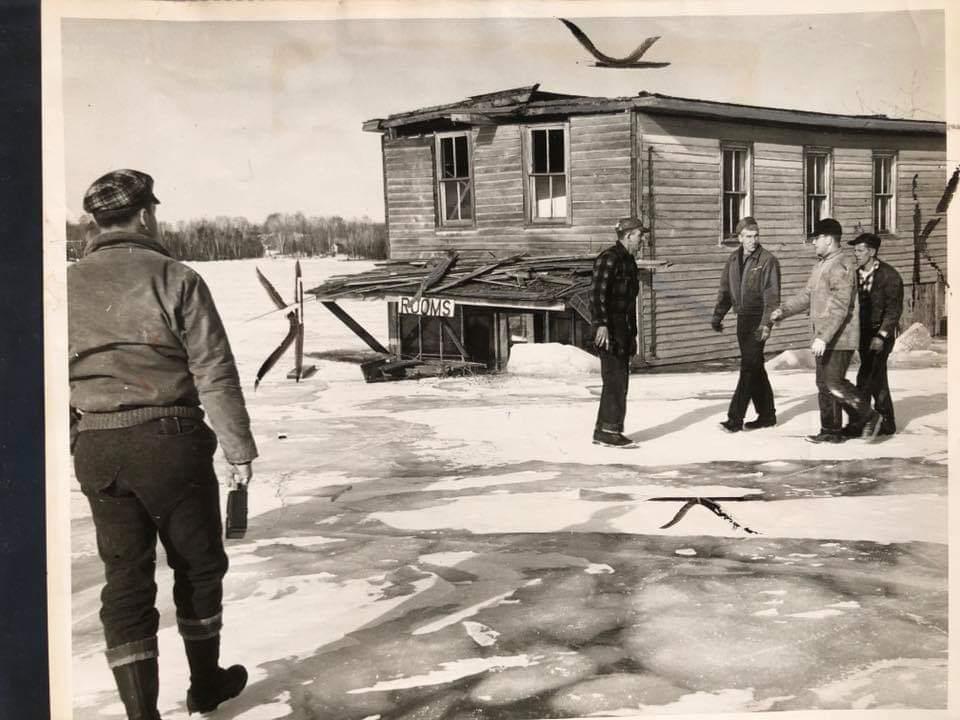 The "Eastport Inn" halfway through the ice on frozen Torch Lake!

After careful deliberations on how to get the building out of the lake, a team of ice cutters was hired to slowly cut a channel to shore. The building was then winched to the beach and brought down the road before finally arriving at the Brownwood Campus. After being rebuilt, the old Inn opened as the Brownwood Country Store. A Tea Room was added to the side of the building, homemade jarred goods stocked the shelves, and penny candies filled the blown glass jars. Children’s eyes glowed with glee. 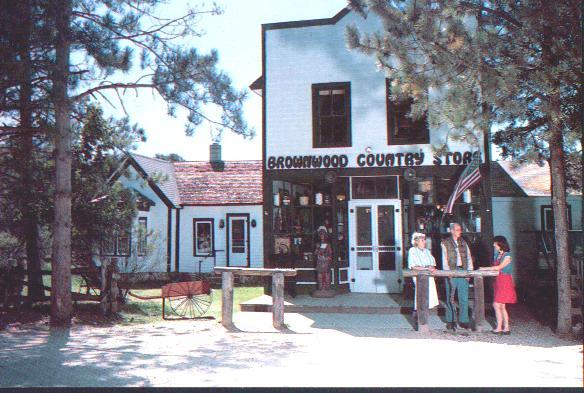 In 1962, Gary Morse and his wife, Sharon, turned their eyes on the family “Farmhouse” and opened it as the Brownwood Farmhouse Restaurant. By the 1970’s the “small village” that is Brownwood Acres was figuratively and literally rocking. Gary brought in talented musicians from Ball State University and had live entertainment year round. 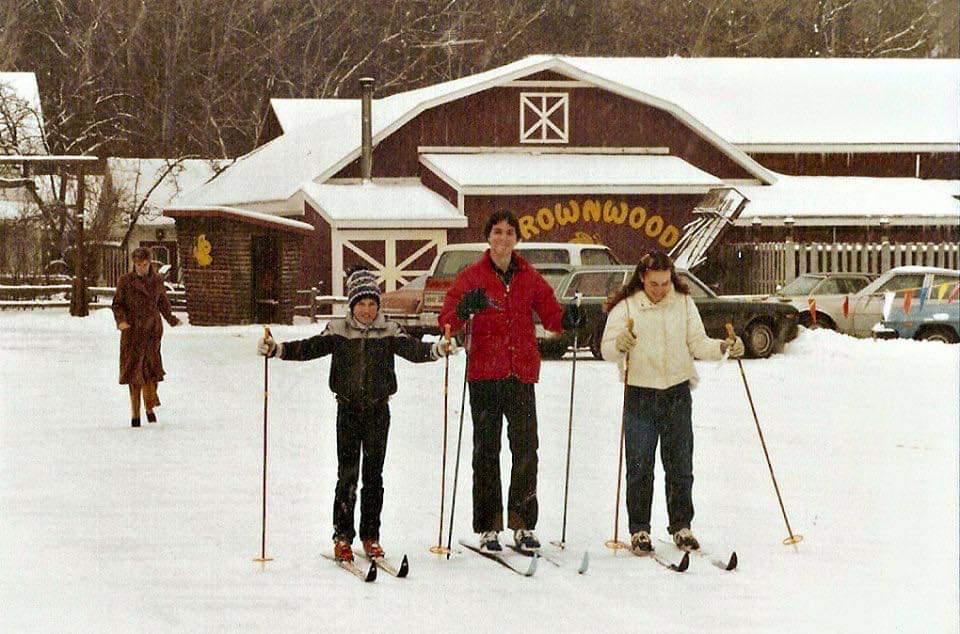 Cross country skiers in front of the Brownwood restaurant.

By 1980, Mary Louise’s daughter Mary Lou and Steve deTar, Mary Lou’s son and the fourth generation of the family, took over production of the Jarred Goods. Already famous for our Cherry Butter and Kream Mustard, Steve wanted to grow the line of products with regional distribution. He quickly added new favorites such as Cherry BBQ and Cherry Salsa. Soon he needed more space for production and a fourth building, the Jam Kitchen, was added to the campus.

As distribution grew, a second campus was needed. Steve moved the year-round operations (the shops had become seasonal at this time) down the road to Eastport. In the late 1990’s, as new information started being published regarding the health benefits of cherries, people began to consume the juice that had previously been used as a food ingredient. As a result, Brownwood Acres launched a line of Fruit Juice Concentrates.

In 2016, due to health issues,  Mary Lou was forced to shut down the family shops while Steve kept the year-round business going in Eastport. It was at this time Steve’s children, Hunter, Jordan and Weston decided they were ready for a larger role in the family business. After a few years of being closed, the brothers decided to reopen the Historic Brownwood Acres Campus in 2018. As each year passes, they are excited to continue to rejuvenate the shops that have created so many great memories.